biomedical field. We hope that these developments will soon lead to therapeutic advances for children

suffering from a rare disease like Ring14 syndrome. However, all this requires medium to long term

planning which, in the meanwhile, should also provide "intermediate outcomes" from scientific

publications, presentations at scientific conferences to awarding of funds from government and private

agencies to further research efforts. These results constitute the so called "scientific productivity" of a

researcher, which for Ring14 International, as well as for any other organization that deals with financing

and promotion of scientific research, represents an important element in order to constantly monitor the

impact of the utilized efforts and resources.

Med, 2014), and although the limited number of years that Ring14 International has been supporting

research programs does not allow us to make a thorough analysis, we can, however, already derive some

indicative values from the research we have promoted.

To date, we have published 15 scientific articles (plus 3 to be published in 2018) through Ring14 funding to

research centers or through our direct cooperation in facilitating research projects, such as the creation of

the Clinical database or " biobank” project [Figure 1]. It is important to note that since 2009 at least one

article per year has been published with funds provided by Ring14 International [Figure 2, histogram in

from scientific studies (source: Google Scholar) with an average of 9.7 per article (considering articles

published until 2016). In Figure 1 you can see the incremental value of the citations obtained year after

If we analyze the research areas of greatest interest, we can see that about half of the articles (53%) have

disciplines that deal with "Studies on language", "Neurology", "Pediatrics" and "Biology" [Figure 3].

Evaluating the most commonly used in the field of bibliometric indices, the journals that have published

articles promoted by Ring14 International have an h-index average of 71.8 (it was 63.6 last year, source:

of scientific conferences, among which the most important are:

In addition, through collaboration with Ring14, some researchers have been able to obtain additional 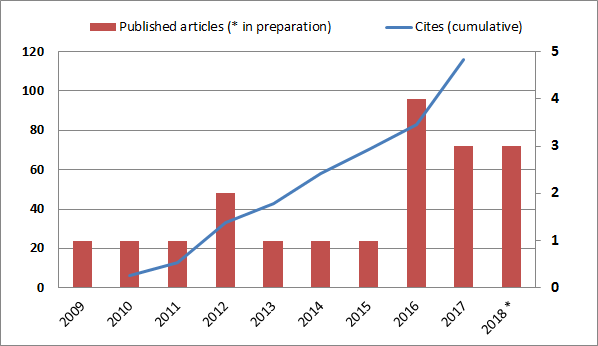 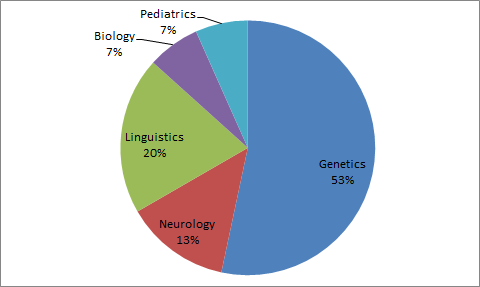